At the Connect2 Steering Group meeting in March it was announced that the County Council were no longer able to replace the River Wreake footbridge connecting Cossington to Watermead Park, due to a funding shortfall. However, the end of the 2010/11 financial year has identified that the funding shortfall for the completion of the remainder of the scheme, including the replacement of the Wreake footbridge, is not as high as previously predicted. This is due to the final cost of the works in 2010/11 being less than the estimated target cost, and the income generated from the project being greater than first reported.

Leicestershire County Council will therefore be able to build the new multi-user crossing of the River Wreake during financial year 2012 / 2013.

There is now a new Loughborough Area Cycle Map available. You can obtain paper copies from the council offices and a pdf version can downloaded from http://www.leics.gov.uk/index/environment/countryside/cycle_trails/loughboroughcyclingmap.htm . It includes the routes of the yet-to-be completed Connect2 route into Watemead Park (see above).

Why do fewer women cycle?

American suffragette Susan B Anthony in 1896 said: “I think cycling has done more to emancipate women than anything else in the world.”

In a nutshell, bicycles allowed an escape from house and husband, but the subject is explored in fascinating detail by Bella Bathurst in The Bicycle Book.

The question of why women cycle less than men in this country remains unanswered and whilst transport planners, cycling organisations and researchers have a number of theories, the issue has worrying implications for the future of cycling in Britain; adults who have not cycled while young are less likely to encourage their own children to use a bike.

As Bella Bathurst puts it so well, the bicycle has as much to offer today as it did in the nineteenth century: “A bicycle still offers freedom, but this time from cars and queues, from oil, from rising prices and a life inside. It gives us back the landscape and makes us part of nature again. It belongs to everyone – every age, every class, every race and religion. And, most importantly of all, it’s fun. A century on, and bicycles are still liberating us all.”

In the Netherlands, more women than men cycle. There are likely to be many reasons why this is so, but there is significant investment in infrastructure, cycling is far less tribal and competitive than in Britain with far more emphasis on the activity as a practical way of getting about.

The Fietsersbond campaigns for better cycling conditions in the Netherlands and produced this graph to illustrate how cycling rates there vary according to gender and age. 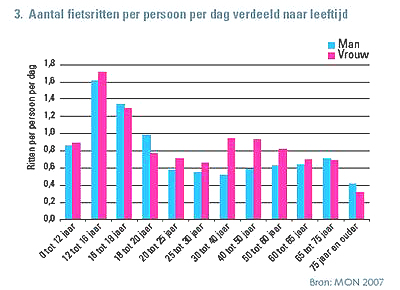 Blogger David Hembrow debunks various myths surrounding cycling in the Netherlands and tackles the excuses made for why cycling levels in other countries are relatively low.

Popular excuses that David explores include: narrow streets; the cost of infrastructure; a spread-out population; hills; distances that are too great; the time it took to establish cycling in the Netherlands, the price of petrol and the weather.

Elly Blue has looked at the Dutch figures compared to the average in the USA.

She attributes the low proportion of women cycling to:

A big welcome to James Lowe who has recently arrived in the region from the north-east to continue the excellent work for Sustrans formerly undertaken by Patrick Davis. Patrick recently retired after may years of outstanding work promoting cycling in Leicestershire and Derbyshire.  James will also be based in Leicester.

20mph speed limits for residential areas has come out as the key recommendation of the EU Transport and Tourism Committee on improving road safety in Europe.

The Committee comprises MEPs from a wide range of political parties and countries and is seeking to halve EU road deaths and injuries by 2020. The Committee sets out specific measures to reach this goal and identifies 20mph limits as key for protecting children. They are calling for a 30km/h speed limit in all residential roads and on single-lane roads without cycle tracks, to help cut the number of children under 14 years old killed by 60% and those seriously injured by 40%.

Rod King, Founder and Campaign Director for 20's Plenty for Us commented:-

"We have been working with MEP's for some time to show how the 20's Plenty for Us campaign in the UK is attracting wide political and community support as an effective initiative to reduce danger on our roads and develop the right conditions to make our streets better places to be.

This recommendation is recognition of not only the success of lower speeds in the countries already adopting wide area 30km/h limits and that, as evidenced in the UK, it is possible to "retro-fit" our streets with lower speeds that are accepted by communities and result in reduced casualties.

We now have over 5m people living in towns, villages and counties where the local authority has adopted a Total 20 policy.

Perhaps we should be applying more pressure on our local government to implement area wide 20mph speed limits? More information on the campaign can be found at www.20splentyforus.org.uk

edited extracts from the Sunday Times 19/6/11

We must wage war on the militants. First we must make it an offence, punishable by many years in jail, to ride a bicycle in anything other than what I like to call home clothes. Cycling shops selling gel for your bottom crack and outfits with padded gussets will be raided by the police and the owners prosecuted.

This way, cyclists will be stripped of their uniforms and made to look like human beings. They will be forced to abandon their crash helmets. Nobody in their right mind believes that a bit of yellow polystyrene could possibly keep a head intact should it be run over by the rear wheels of an articulated lorry. So get rid of them.

This way children will grow up to think that cycling is fun.