At a meeting of Leicestershire County Council’s Cabinet on 20 July 2021, the Director of Environment and Transport submitted a Cycling and Walking Strategy report that included the following:

“To date the Authority has focused efforts on supporting the growth agenda in support of Government policy and funding (bidding) criteria/objectives. This has meant, in reality, investment in cycling and walking infrastructure has had to take lesser priority than road-building schemes aimed at reducing congestion and improving motor vehicle journey times (albeit those schemes normally do include pedestrian and cycle enhancements). This,combined with limited dedicated Government funding for cycling and walking schemes,has historically and inevitably resulted in a slower, less holistic, approach to delivering cohesive cycling and walking networks.”

This will come as no surprise to those of us who have been campaigning for the promotion of active travel for decades. Let us hope that this report heralds a true change in attitudes and priorities. We have heard the Council set out many fine ambitions over the years, but none have been anywhere near achieved.

The Coop in Quorn has installed a bike repair station outside the front of the store for use by any cyclist. It contains a selection of tools to enable small roadside repairs and adjustments. It includes a pump, tyre levers and various sizes of allen key, screwdriver heads and spanners 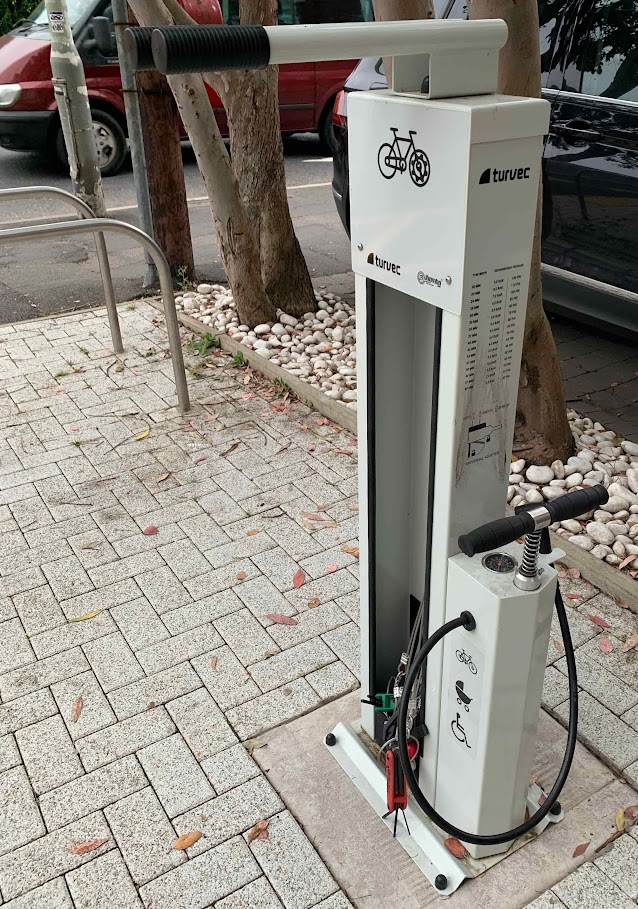 The store itself also has a useful selection of bike accessories for sale.

A similar repair station is to be found at Loughborough station. The availability of a good pump is to welcomed in particular, as many cycles have under-inflated tyres.

Quorn Parish Council is investigating the potential to refurbish the Quorn to Old Woodhouse bridleway. Its objective is to offer an alternative route for walkers and cyclists avoiding the busy and difficult section of B591, Woodhouse road. The 2019 Neighbourhood Plan identified considerable local interest in improving the walking and cycling routes in the Parish.

The bridleway runs from Buddon Lane in Quorn to Vicary Lane in Old Woodhouse. It is mostly tarmacked apart from a 600 metre middle section which has a very poor surface and is liable to waterlogging. This section is currently only suitable for determined mountain bikers and enthusiastic walkers and it is often impassable during wetter periods.

We have engaged with Leicestershire County Council, who are responsible for the upkeep of the path, and we are now contacting landowners along the affected section of the route.

This will not be an easy project to deliver. Local government budgets are stretched and we may end up having to deliver it in sections at different times due to the complexity of land ownership.

Longer term, if we can make this happen, we may be able to create a model that can be used for other bridleways in Charnwood Forest. In total, there are about 15 miles of bridleways in the locality in need of refurbishing and upgrading. Together these could create a fantastic alternative travel network and encourage greater cycling interconnectivity between communities and local attractions.

England - active travel funding up by one quarter

The Government announced an increase in funding for walking and cycling to £338 million - 25% more than announced in the 2020 autumn spending review. However, the Government has ruled that local authorities that have prematurely removed cycle lanes put in with Emergency Active Travel Funding will not be eligible to receive further funds.

In a forward to a review of this expenditure, “Gear Change”, Boris Johnson writes that "schemes must be in place long enough for their benefits and disbenefits to be properly evidenced". It makes some interesting points:

“In the 2019 morning rush hours (7–10am), cycles made up about a third of the vehicles on the roads of central London, and up to 70 per cent on some main roads. London’s new Blackfriars Bridge cycle track carried an average of 26 cyclists per minute, and the new Embankment cycle track – which takes up one lane of this four-lane road – moved more traffic than the other three lanes put together. Across London as a whole, there were around 700,000 cycle journeys in a full day, equivalent to about a quarter of the passengers on the entire Underground.”

“Retail cycle spending rose by 45 per cent in 2020 – which was the first year in history that people bought more than £1bn worth of cycles. Including maintenance, parts and accessories, the total value of the retail market was £2.31bn.”

“The number of miles cycled on the road rose to 5 billion, overall a 45.7% increase on 2019. Cycling was the only form of transport to grow during the pandemic, with cycling levels at times 100 or even 200 per cent greater than before.”

New Version of The Highway Code

Also included in the review of Gear Change is the following:

We consulted on changes to The Highway Code to improve safety for cyclists, pedestrians and horse riders last year, receiving nearly 21,000 responses. Feedback was sought on three key areas:

Respondents demonstrated a high level of agreement for the proposed changes, welcoming the timing as more people choose to cycle and walk. The Department will therefore seek to introduce all the changes and will lay the finalised alterations before Parliament in winter 2021 with the changes coming into force early in 2022.

The Department for Transport’s long-awaited Transport Decarbonisation Plan (TDP) has finally been published, eight months late. While some aspects of the plan are UK-wide, most cover only England, as much of transport is devolved to the respective national governments. The wide-reaching plan includes some key positives, such as the commitment to “deliver a world class cycling and walking network in England by 2040", but, as Cycling UK’s Roger Geffen has suggested, the message from ministers for most people is still that they can “carry on driving”.

One good feature of the TDF is that it is encouragingly positive about the notion that having access to a car without needing to own one is an idea whose time has come. Not only does it save people the fixed costs of owning a car (including insurance), but it also creates a cost incentive which favours walking, cycle or using public transport for trips which don't require a car.

More than a third of English councils support policies that could increase carbon emissions despite having declared a "climate emergency", BBC research suggests.

Road building and airport expansion are among examples provided by 45 out of 121 questionnaire respondents who say they have passed climate motions. Environmentalists say the findings reveal "inconsistencies" in approach. Local leaders insist they are taking action but need more funding.