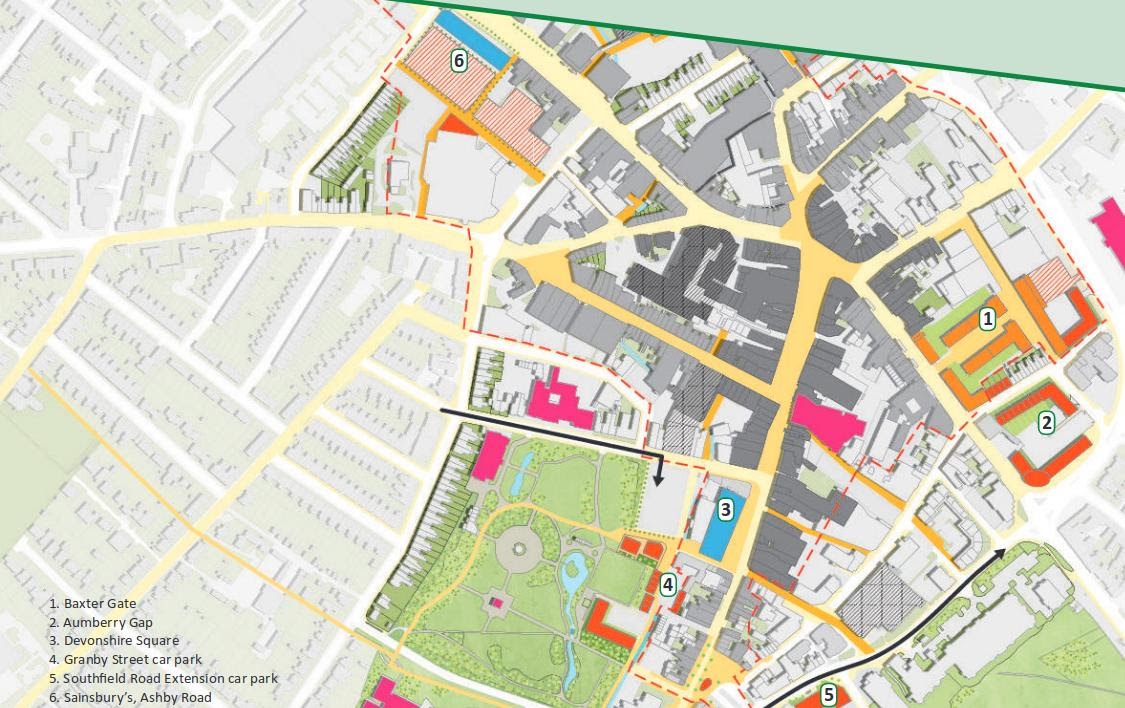 Charnwood Borough Council has published a draft Loughborough Town Centre Masterplan which sets out a number of proposals to develop the town centre, ostensibly to ensure its viability and vitality in the future.

They are now consulting on the document and the deadline for responses is September 22, 2017. You can have a say (please do) via an online survey (goo.gl/dQyPNF) or you can request a paper copy by emailing communications@charnwood.gov.uk or call 01509 634705.

Under Cycling / walking it proposes:

The complete draft of the plan can be found at goo.gl/yuL9zw.

The first objective listed is “To strengthen connections across the town centre to create a more legible network of streets and spaces linking key destinations and promoting active travel”.

The reference to active travel is to be welcomed but in terms of cycling this does not appear to be a major feature within the plan. The issue of lack of permeability for cyclists, due to their being banned from what is now a very large pedestrianised area for the major part of the day, is not addressed.

Cycle access will become even more restricted if the pedestrian network is expanded without allowing concessions for cycing.The Masterplan proposes a number of changes to the vehicular movement network including:

Section 2.4.1 VEHICULAR MOVEMENT mentions neither cycling nor the promotion of active travel although 2.4.5 CYCLE ROUTES states:

The cycle route to the station is located on Nottingham Road. This is a narrow route dominated by heavy traffic and does not create a pleasant environment for cyclists.

The Loughborough Town Centre Parking Strategy recommends that cycle parking in the town should be upgraded in places. It suggests that existing bike racks in Market Place should be replaced with covered stands and the parking along Market Street should be consolidated to an area in Ashby Square (where student cyclists would enter the town).

It would seem that while identifying some of the problems for cyclists, the plan offers no solutions, apart from some minor and irrelevant improvements to cycle parking.

The town’s main public space is Market Place. This is used to host outdoor markets and is the focus for the Loughborough Fair. When it is not used for these purposes the Market Place can feel quite empty.

Surely one way of reducing the emptiness of the Market Place would be to permit cycling on non market days?

No account seems to have been taken of the comment of the Planning Inspector who ruled in favour of the proposal to eliminate buses and cyclists (between 10am & 4pm) from the Market Place:

152. I note the concerns of the Council [45], however, they may wish to consider the evidence from LDCUC [120-124] which suggests that any risk is low and can be minimised by appropriate management. The Council may wish to examine whether any improvements can be made in respect of cycling provision. [Ed.our emphasis].

Section 4.1.8 CAR PARKING states that “Car parking is a crucial part of a town centre make up – and is necessary to ensure it is an accessible location.” It also points out that “surface parking is usually delivered at a cost of around £3,000 per space; multi storey spaces are usually in excess of £15,000 per space to deliver – and basement parking even more costly.”

Even when dealing with town centre residency, the emphasis is on car parking, with no reference to ensuring that residents have adequate and easily accessible cycle parking.

Listed under “Threats” in section 5.1 is “Car dependency - Failure to improve the pedestrian environment may increase car dependency and the need for increased car parking spaces.”

It is difficult to see how the current plan reduces car depency when all the emphasis appears to be on providing parking so that the town centre pedestrian shoppers can arrive as conveniently as possible by car.

Whilst promoting active travel is listed in the first objective, the only reference to it would appear to be in section 5.4.1 PUBLIC REALM IMPROVEMENTS:

“It is not intended to pedestrianise these areas but rather to increase the level of priority given to pedestrians and cyclists, create a more attractive and welcoming environment and reduce the impact of motor vehicles within these areas. This would help promote active travel and reduce reliance on the private car.”

Despite its first objective including the ambition of “promoting active travel”, the plan appears to fail to address the need to move away from people arriving in the town centre by car toward encouraging them to walk, cycle or use public transport. All these options help to reduce pollution and congestion. They also promote “active travel” which is almost certainly the best way of improving the health and fitness of the population, while saving the NHS vast sums in not having to deal with the diseases associated with indolence, largely caused by car dependency, such as heart disease and type 2 diabetes.

'Wanton and furious' conviction for cyclist

Cycling UK has produced this statement following the guilty verdict in the case of Charlie Alliston, the cyclist who collided in London with a pedestrian who died of her injuries.

"Riding a fixed wheel bicycle on the road without a front brake is illegal, stupid, and endangers other road users especially pedestrians. Charlie Alliston's actions had tragic consequences for Kim Briggs' family, and it was entirely right that this led to his prosecution.

The fact that he has been convicted of an offence dating back to legislation from 1861, drafted in archaic language, will doubtless lead some to argue that the laws on irresponsible cycling should be aligned with the laws on irresponsible driving. The reality is that the way in which the justice system deals with mistakes, carelessness, recklessness and deliberately dangerous behaviour by all road users has long been in need of review.

In 2014, the Government acknowledged this when announcing a full review of all motoring offences and penalties, but then waited three years to launch a limited consultation last year which closed six months ago, with silence ever since.

To ensure that there is consistency with charging decisions, and with how dangerous behaviour on or roads is dealt with, it is vital that the Government ends the delay, and gets on with the wide scale review that politicians from all sides, victims' families and various roads safety organisations have tirelessly demanded."

Most GPs not promoting physical activity

An online survey, published in the British Journal of General Practice, to assess how much GPs in England know about official physical activity guidelines and their levels of confidence in them, showed that (from the 1,013 responses analysed):

The authors conclude that: “Although brief advice in isolation by GPs on PA will only be a part of the behaviour change journey, it is an important prompt, especially if repeated as part of routine practice. This study highlights the need for significant improvement in knowledge, skills, and confidence to maximise the potential for PA advice in GP consultations.”

Cycling on prescription is a particular effective way of encouraging people to take more exercise, and various referral schemes are around to help. West Yorkshire-wide Cycle 4 Health projects and the Alton Cardiac Rehab group are good examples.

Based on an article in Cycling UK’s Campaign News

According to the latest National Travel Survey (NTS, England), there’s little overall change to report for cycling in 2016, although it does look as if the number of miles people cycle on average per year each is creeping up: 53 miles last year and the year before, a whole 37% more than in 2002.

The survey’s data on cycle trip purpose shows little movement, although a table on where people said they usually cycled over the last 12 months shows that riding 'mainly off the road in parks, open country or private land' continues to grow in popularity, now up by a huge 72% since 2002.

A wide range of factors influence levels of cycle use from year to year, including the weather, fuel prices, population mix, the economy and fashion to name but a few.