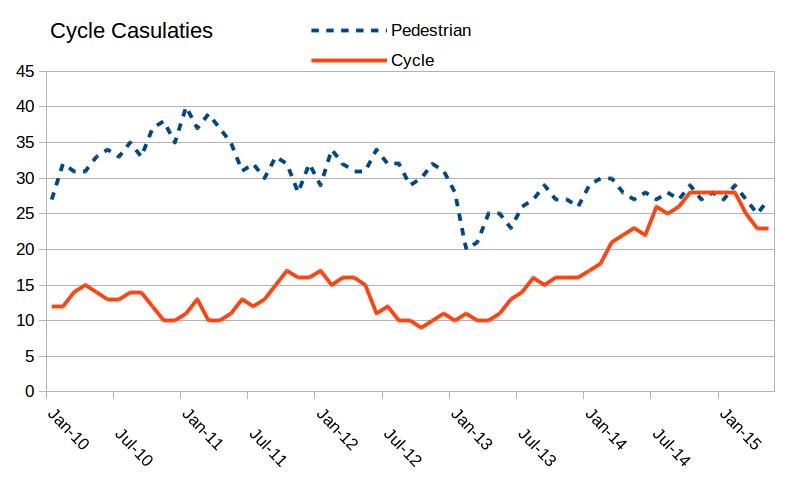 There has been a worrying rise of c.75% in the level of killed and seriously injured (KSI) casualties amongst cyclists in Leicestershire (see graph on right).

Max Hunt, Labour Spokesperson of the Environment & Transport Scrutiny Committee, is concerned at the numbers since cycling levels have not shown a greater or similar increase.

There is some speculation that the problem might be down to a deterioration in the behaviour of drivers. Less than 25% of the crashes were considered to be the fault of the cyclist when police logged them. It is known that the police have been reducing the level of resources they devote to monitoring traffic and prosecuting offenders.

Based on an article in CTC Campaign News

Appearing before the Commons Transport Select Committee at its inquiry into road traffic law and enforcement, CTC’s Policy Director Roger Geffen explained that the 37% drop in traffic officers in England and Wales since 2003 may well account for an alarming increase in the risk per mile of a serious cycling injury - up by around 15% since 2008. In contrast, the risk for car occupants has gone down by around 28%.

Disappointingly, the MPs on the committee seemed more interested in asking unhelpful questions, e.g. about the supposed need for cyclists to have compulsory training, insurance and to be forced to wear helmets.

Lord Ahmad responded to such comments with commendable good sense, and wrote: “the costs of a formal testing and licensing system for cyclists would significantly outweigh the benefits cycling has to the country’s economy, health and environment [ … ] It is likely that a licensing system will discourage many existing and potential cyclists, leading to a dramatic fall in the numbers of people cycling.”

This was reinforced by Lord Taverne in the House of Lords when he pointed out that “the serious injuries caused by cyclists must pale into insignificance when compared to those caused by motorists” and that “… bicycles are the most efficient machine yet invented for turning energy into motion. Indeed, the bicycle has been accurately described as a kind of green car, which can run on tap water and tea cakes and, moreover, has a built-in gym.”

Derby City Council and Derbyshire County Council have created a partnership to bring forward this plan which is to be launched at an event on Derby Arena on 19 January 2016. The plan can be found at http://goo.gl/VQB60R . Perhaps Leicester and Leicestershire could form a similar partnership?

Jonny Wiseman is to be congratulated on receiving this award from the Bicycle Association. He was asked to “sort bikes” at East Midlands Trains. That is exactly what he’s done. He has been credited with revolutionising the company’s attitude and response to cycle-rail and for having carried out work that will deliver benefits to users for years to come.

Jonny has led work on a series of successful improvements for cyclists across the network, both at stations and on trains. He has overseen the delivery of two cycle hubs at Sheffield and Leicester, which required him to overcome some complex issues with a range of stakeholders.

He has also ensured that the associated cycle shops are locally run, that East Midlands’ cycle hubs are free, that all Management Development Trainees are given a cycle related project as part of their course, and that regular engagement between East Midlands Trains and cyclists is taking place.

Jonny led the response by East Midlands Trains to the Tour de France in Yorkshire and ensured a world-class service was delivered to all those who travelled with East Midland Trains. The result was a festival atmosphere at Sheffield for the weekend and thousands of delighted customers.

Great changes have been made to the cycle-rail provision at East Midlands Trains thanks to Jonny. He has taken thinking about cycles within the company from an after-thought to a point where they are seen as an integral part of the customer experience.

Good wishes are nice, but where’s the cash?

Based on an article in CTC Campaign News

Just before Christmas the Government outlined its timetable and approach to developing the various elements required to deliver the first Cycling and Walking Investment Strategy (CWIS).

Amongst a number of welcome and positive statements in the document is a commitment to "ensuring" that cycling and walking are prioritised in new street design or maintenance programmes, together with reducing road traffic to tackle air pollution and climate change.

However, funding for the admirable aims of CWIS is still an issue. We can be grateful that the Chancellor at least mentioned cycling in his speech, giving us something that we've been campaigning for: a long-term commitment to cycling.

In fact very little funding was allocated. Consequently we must rest our hopes on the 'Statement of Funds Available' (SoFA), expected in early 2016, which the Department for Transport (DfT) says will support the 'Investment Plan' for CWIS. Given that 'reducing traffic' is a now a DfT aim it would seem to make sense to reallocate some of the £15 billion for road building to cycling instead.

Based on an article by Duncan Dollimore in the CTC Blog

The Chancellor has announced a cycling budget of £300M for all of England excluding London over the next 5 years. This includes £114 million already allocated to the eight cycling ambition cities and leaves £186 million for the rest of England, or the equivalent of less than £1 per person a year.

Transport is a major contributor to greenhouse gas (GHG) emissions largely because of the carbon dioxide from road vehicles. The same vehicles also emit nitrogen dioxide (NO₂), a major cause of air pollution.

£300 million is also the figure the UK is likely to have to pay annually from next year in fines if it fails to comply with EU air pollution targets, specifically NO₂ limits. So the UK is likely to be paying the same in annual fines as it is on its five year cycling budget for England. It would therefore seem sensible to spend money encouraging cycling, particularly in city centres and urban areas, to reduce NO₂ emissions to safe limits and thus avoid or mitigate fines which will dwarf the current cycling investment levels.

In addition, according to the Government’s Cabinet Office Strategy Unit, poor air quality in urban areas is estimated to cost the economy between £4.5 and £10.6 billion a year (at 2009 prices), a staggering 75 times more than the amount now made available by the Government annually for cycling, one of the potential solutions to the problem.

When contemplating the problems of global warming, pollution, congestion, obesity and rising health costs, perhaps politicians could ask themselves whether they can think of an activity that can positively contribute to all of those issues and then invest in it.

Based on an article by Duncan Dollimore in the CTC Blog

Lord Wills would seem to be a firm believer in stereotype over statistics. “Bully boys on bikes terrorising pedestrians”, was part of his speech as he demanded assurances that the Transport Minister would ‘bring some law and order to our pavements’. Referring to his time as MP for North Swindon, he explained that, apart from dog mess, cyclists ‘terrorising pedestrians’ was the issue that concerned his former constituents most!

It's surprising how North Swindon has changed in the four years since 2011. Ten days prior to the 2015 General Election, the five North Swindon candidates faced questions at a public hustings event, where predictably the NHS, social housing, immigration, EU membership and education dominated the debate. What a surprise, no mention of pavement cycling as the burning election issue!

Lord Wills, however, was adamant that the problem was ‘getting worse’, hence his question asking the Government ‘what action they are taking to increase compliance by cyclists with traffic laws’, a question he presumably asked because he didn’t like the answer he received three weeks earlier to his question asking what assessment the Government had made ‘of the number of breaches of traffic laws and regulations by bicyclists’.

Undeterred by his fellow Peers’ reluctance to accept his apocalyptic vision of pavement cycling Armageddon, Lord Wills cunningly put the burning issue of feral lawbreaking cyclists back before the House of Lords the following week, with a re-phrased question about the ‘possible advantages and disadvantages of licensing bicyclists’. So where’s your four-year-old’s licence?

The response from Lord Ahmad was almost exactly the same as that Earl Attlee gave in November 2011 when the ever persistent Lord Wills asked the same question, namely that bicycles involved in collisions on the highway are unlikely to cause serious injury to other road users, a licensing scheme would discourage cycling, the costs of which would outweigh any benefits, and supporting the Bikeability scheme rather than licensing was the way to go. Which bit of that did you not follow in 2011 Lord Wills?

So, in March 2012 in the House of Lords, the debate must have concerned the banking collapse, climate change or another national or global issue. No, we’re back to Lord Wills again and ‘the selfish and reckless behaviour of cyclists towards pedestrians, particularly when they cycle on pavements’. A ‘growing problem’ usually involving ‘lycra-louts’ showing ‘contempt’ for vulnerable pedestrians. More stereotypes in a Lord Wills speech than a 1970's sit-com.

Of course behind the sound-bites, the figures Lord Wills relies upon to justify his portrayal of pedestrian carnage by pedal cyclists must be accurate and won’t be misleading? Well, unfortunately the idea with statistics, Lord Wills, is you look at them first, then form your view, not the other way round.