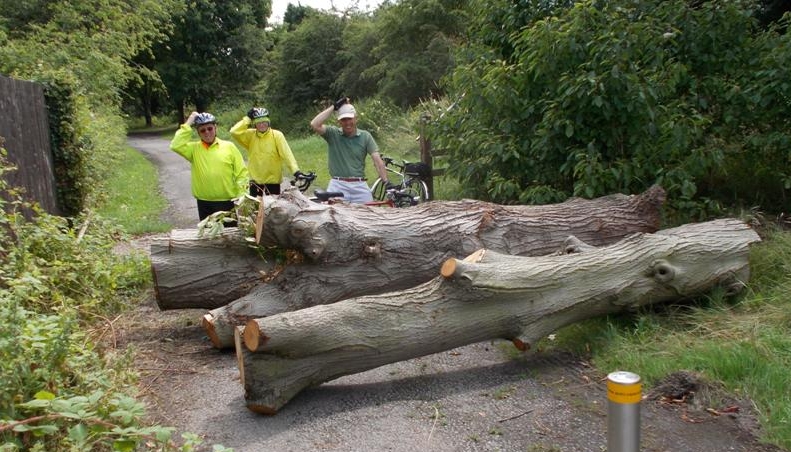 Local cyclists were surprised to come across this barrier across the access from the Blackbrook cycle path to that alongside the A6 to Hathern at Dishley. Initial enquiries evoked the response that the trunks had been placed there to prevent access by “Travellers”. This begs the question, why was it necessary to prevent access by cyclists and wheelchair users? Leicestershire County Council is investigating.

This academic paper (published in the American Journal of Public Health) by Elliot Fishman, PhD, Paul Schepers, PhD, and Carlijn Barbara Maria Kamphuis, PhD (University of Utrecht) concludes that Dutch people who cycle live six months longer on average than those who don’t, and that cycling prevents about 6,500 premature deaths each year in Holland. In their research, the authors used the Health Economic Assessment Tool (HEAT) and found that the health benefits correspond to more than 3% of the Dutch gross domestic product (published in the American Journal of Public Health).

By way of contrast a report entitled “The Economic Cost of Physical Inactivity in Europe” indicates that inactivity costs the European economy over €80 billion per year; 1 in 4 adults across Europe is insufficiently physically active, as are 4 out of 5 adolescents; and physical inactivity could become a bigger risk to public health than smoking.

The European Cyclists’ Federation (ECF) has just published its second ‘Cycling Barometer’, a multi-dimensional view on cycling in all 28 EU countries.

As comparing countries across numerous fields is not easy, the Barometer is based on verifiable EU-wide surveys on five topics: road safety, cycling usage, cycling tourism, market size and cycling advocacy.

Once again, Denmark and the Netherlands come out on top overall, closely followed by Sweden, Finland, Germany, and Belgium. The UK, assigned 10th place in the last Barometer in 2013, hasn’t moved, although this time we shared the spot with Slovakia. Cyprus, Portugal and Romania were bottom, taking 26th-28th rank respectively.

An academic paper published in “Ecological Economics” has found that the use of cars costs society and private individuals six times more than cycling. The authors came to this conclusion by studying the cost benefit analysis used by Copenhagen to decide whether new cycling infrastructure should be built. Comparing cars to bicycles in terms of air pollution, climate change, travel route, noise, road wear, health and congestion, the impact of the car comes in at EUR 0.50 per kilometre and the impact of the bicycle at EUR 0.08 per kilometre. The study also shows that, looking at the costs/benefits for society alone, one kilometre by car costs EUR 0.15, whereas society earns EUR 0.16 on every kilometre cycled.

Tackling air pollution is a duty that the new Government can’t ignore after losing a 5-year legal battle brought against it by activist lawyers ClientEarth.

The Court has now ordered the Government to “… prepare and consult on new air quality plans for submission to the European Commission no later than December 31 2016."

The UK Government identified emissions from transport as a major offender - on average, responsible for around 80% of nitrogen dioxide emissions at sites exceeding the EU limit values. Investing in sustainable and non-polluting travel, especially walking and cycling, will therefore be vital.

This policy paper recommends “a comprehensive range of measures to reduce cyclist casualties and help people who want to cycle, but are deterred from doing so because they think it is not safe enough.” It includes a supportive section on the ‘safety in numbers’ argument, i.e. that more people cycling, accompanied by measures to improve conditions, leads to fewer casualties and does not call for compulsory helmet wearing.

It also emphasises the benefits of cycling rather than the hazards :
Lack of physical activity is one of the most important risk factors for coronary heart disease, with a physically inactive lifestyle doubling the risk compared to an active lifestyle. Regular exercise is central to improving the nation’s health, with cycling being an excellent method of building regular exercise into people’s daily lives.
In summary, regular physical activity:

In addition to these health benefits, there are also environmental benefits from cycling rather than driving, as cycling generates minimal CO2 .

The Department for Transport estimates that it’s possible to achieve a 50% CO2 reduction in the UK’s domestic transport sector by 2030, but only with real and early change in travel behaviour. Car Travel is the single biggest source of household and individual CO2 emissions in the UK. More than half of all trips are 5 miles or less and account for 21% of CO2 emissions. If all drivers reduced their driving by 5 miles a week, 2.7 million tonnes of CO2 could be saved per annum.

To quote from the report's conclusion:
RoSPA strongly supports measures which encourage healthy and sustainable travel, and believes that the key to increasing cycling (and so gaining all the health and environmental benefits that result from cycling) is to create a safe on- and off-road cycling environment, improve driver and cyclist attitudes and behaviour towards each other, and to produce safer vehicles that reduce the risk to cyclists.

Things it’s legal to do while cycling